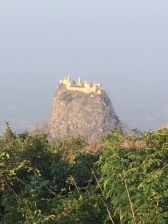 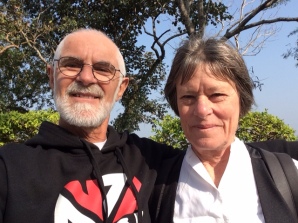 We looked out the window into the haze surrounding the bush-clad hills this morning and spied a temple complex perched on the top of a large rock, like a pimple on a pumpkin.

But alas the bot had hit Greg who was up several times in the night with diarrhoea and feeling queasy. It was a later start and after I at least had a wonderful breakfast, we left in the van to scale the pumpkin. We are told it was 900 steps up and on the way we passed souvenir shops and chaps who asked for money for keeping the steps clean! And lots of monkeys were roaming free – when Greg asked one his name it attempted to scratch him. Anyway Greg was very weak and didn’t attempt the steep climb, and I was pleased that my walking ability from “The Hip” was not affected. At the top there were the usual stupas and temples with the more devoted Buddhist saying prayers and laying offerings. And the 360 degree view pretty good – we could just spot our accommodation, environmentally sympathetic as it is. Bus-transported tourists everywhere.

We collected Greg at the bottom and returned via a lunch stop for a rest and recreative afternoon – Greg was incredibly weak but after Loperamide and a sleep seemed to perk up. Riding tomorrow may be another thing.