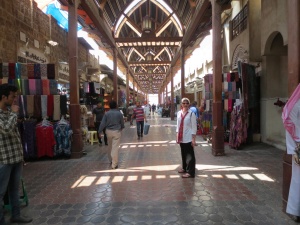 Glad to sleep in a bit before having a breakfast we rated 4 out of 10, and booking an afternoon bus tour.

We ventured out deciding to take a taxi and ignoring the advice that it would take only 10 minutes to walk to the old markets – actually it took 15 minutes in the taxi and there was absolutely no way we would have survived such a walk in the 40 degree heat. It was the hottest we have ever experienced and we had some difficulty finding the market, under cover but not air conditioned, rather like an Indian bazaar with shopkeepers accosting us and showing their silk pashminas which I suppose are what westerners usually buy. It was too hot to be out of air conditioning for long and our clothes were wet with sweat which dribbled down our faces. We retreated to a flash air conditioned shopping mall – sporting designer stores like Louis Vuitton where it was difficult to obtain food except to take away because of Ramadan and we were not allowed to eat it anywhere near the mall. So we went back to base and had a picnic in the hotel lobby!

It was too hot to sit on the open double decker bus which was the tour transport. We were fascinated, appalled, awestruck – you name it, about what we saw.

The tour took us along the waterfront where we passed mansion after mansion of medical clinics, the most common being expensive looking plastic surgical and dental clinics. Holiday mansions of the rulers had beachfront access to the beach – not sure if it is man made, but along with skiing and ice skating facilities we saw advertised, we presume it was created because they could! We stopped at a top of the range cross between a collection of boutiques and an exhibition – luxury items for Africa and then drove to The Palms – a man made island with acres and acres of new looking Truman Show type apartment blocks and luxury hotels – no expense spared and evidence of construction of many more.

The phallic symbol skyscrapers including the world’s tallest building clustered together in the centre of town, are spectacular, imaginatively designed and beautiful in their own way. The tour took us to a museum of the history of Dubai and the coolness inside lured me out of the bus for a mercifully short circuit – very nicely set out, but then everything is here!

The last stop was, the largest shopping mall in the world. There are plans to build a bigger one relegating this to be the second largest! It was more like 277 or St Lukes than the previous ones we have visited. But the most fascinating was the call to prayer that rang out at sunset, shortly after 7 pm and the unpausing of what had looked like a still scene – everything was happening as you would expect at dinner time – people were in queues, were consulting menus, bar people were poised, tills were ready to ring but as decreed for Ramadan, nobody was selling or eating food until after sunset. Then away they went as the call rang out! Rachel will be pleased, as we had a cinnamon roll from Canadian Tim Hortons.

A tasty Indian meal at the hotel restaurant capped the day of visual symphonies as we set the alarm for our departure from this oven early tomorrow morning.